My Account
Login
0Wishlist
Your wishlist is empty.
0Shopping cart
You do not have any products in your shopping cart yet.
Menu
Menü
HomeRumble59SchmiereOtherRumble59 - Schmiere - Poker Game | Schmierblatt 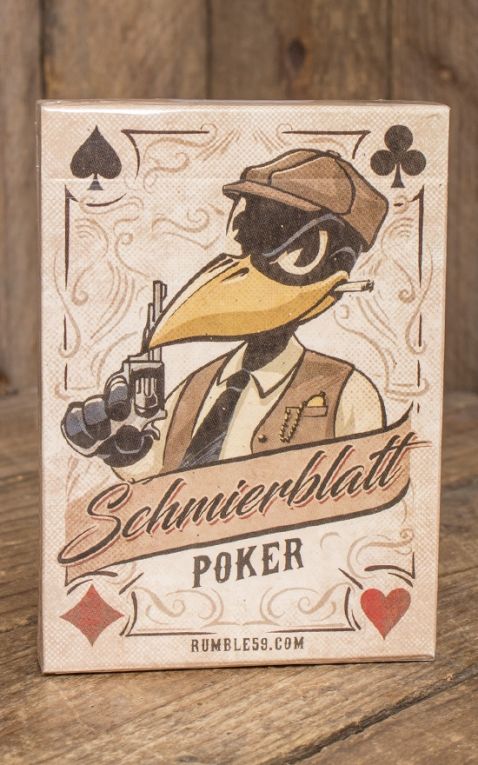 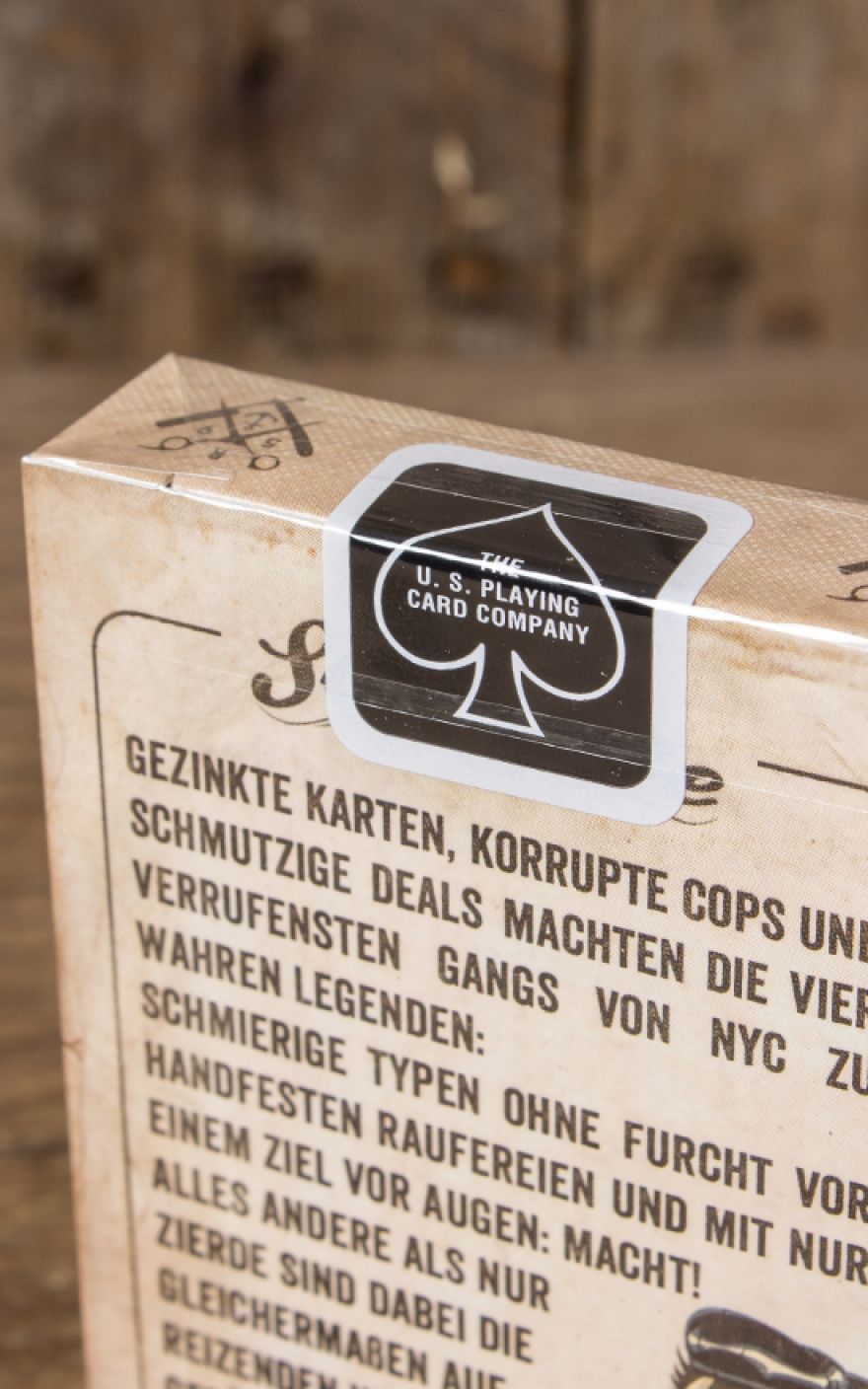 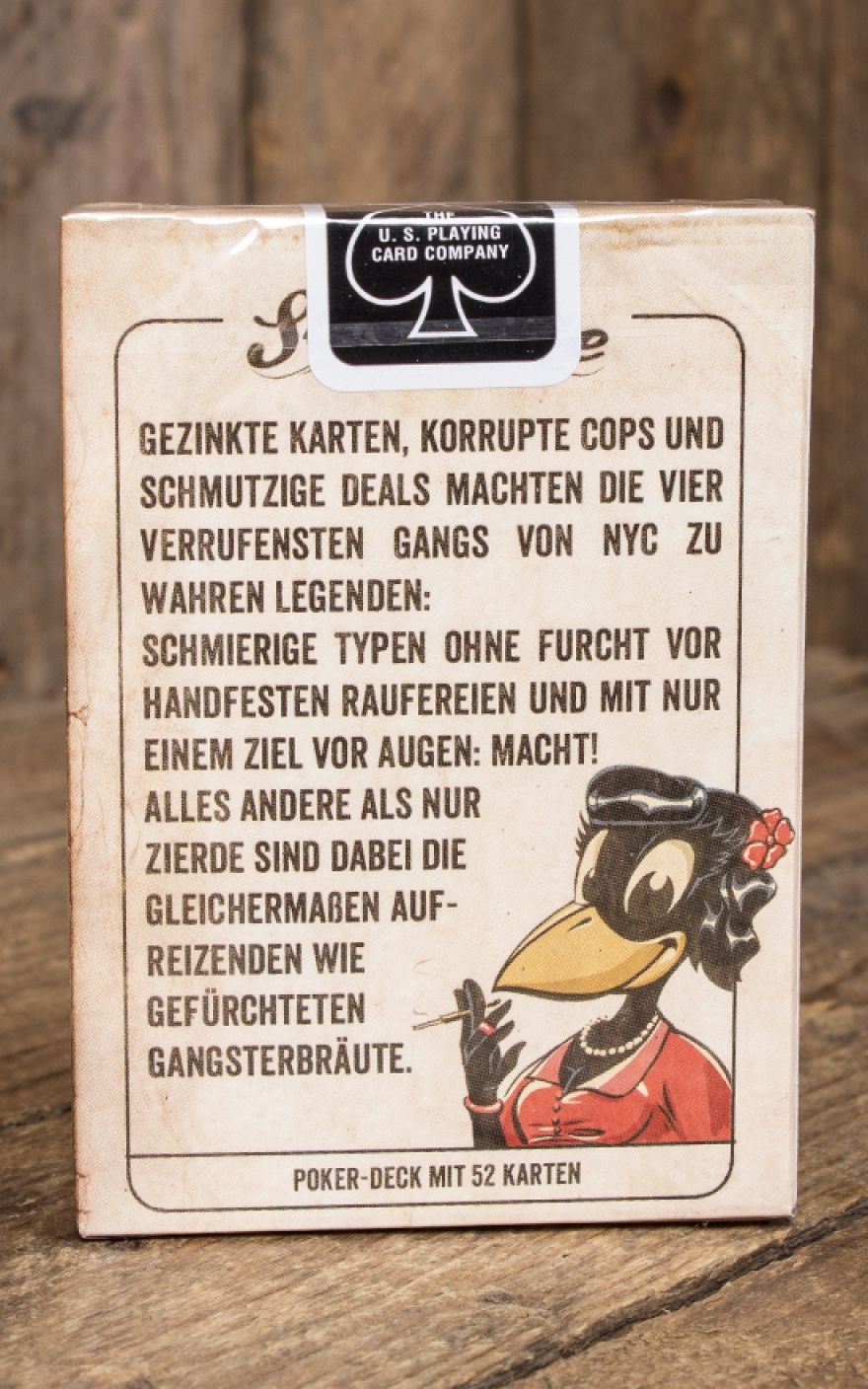 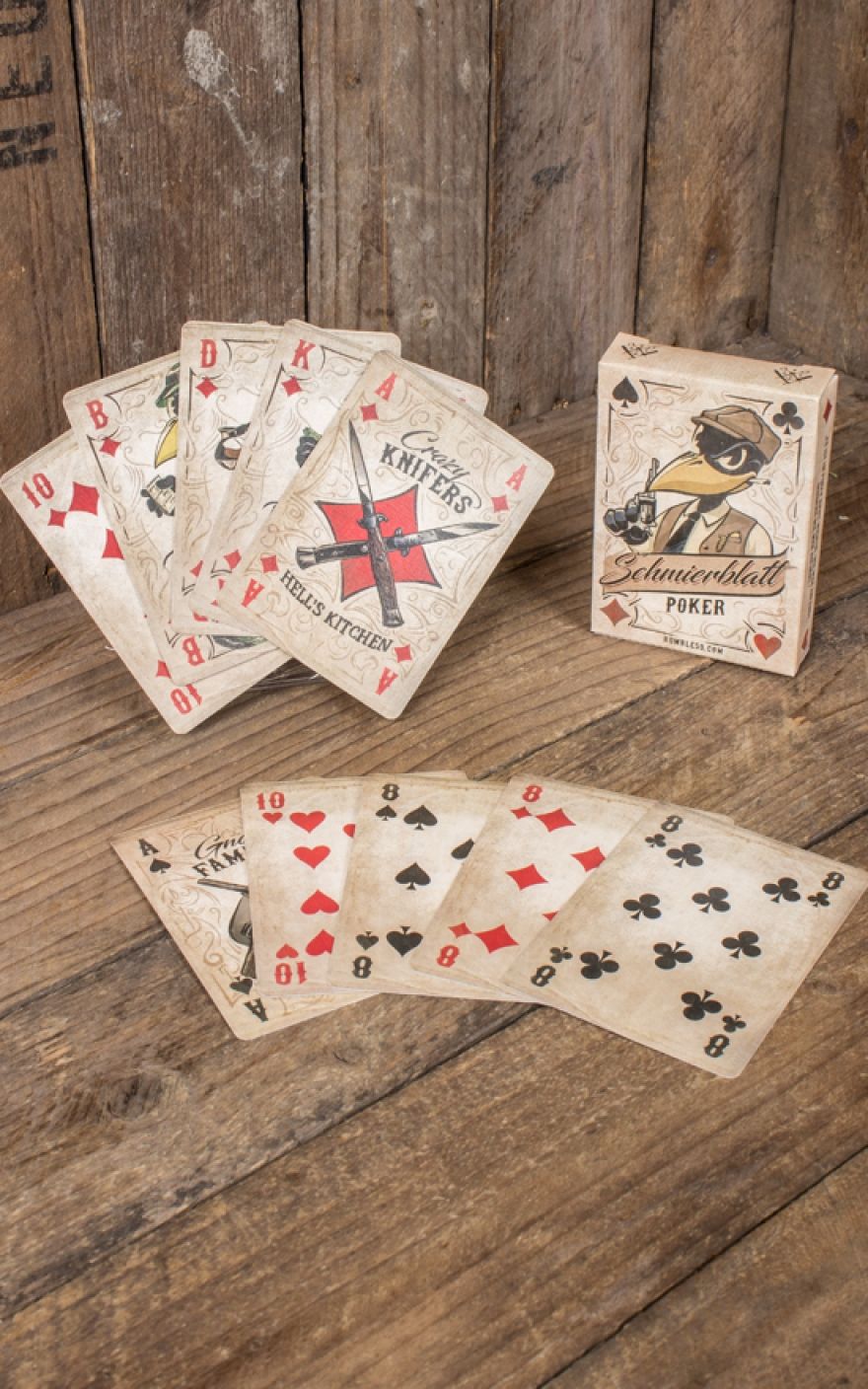 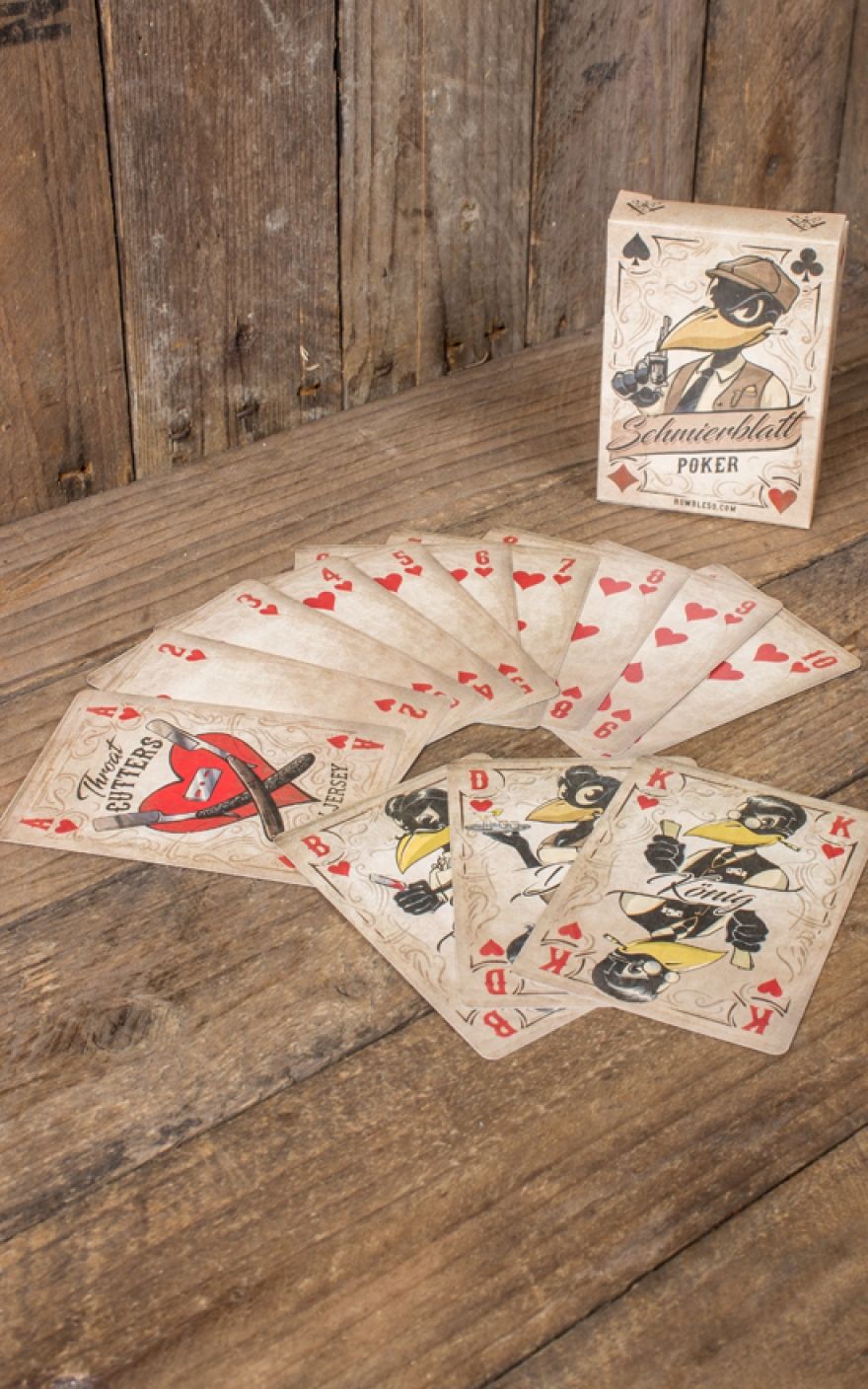 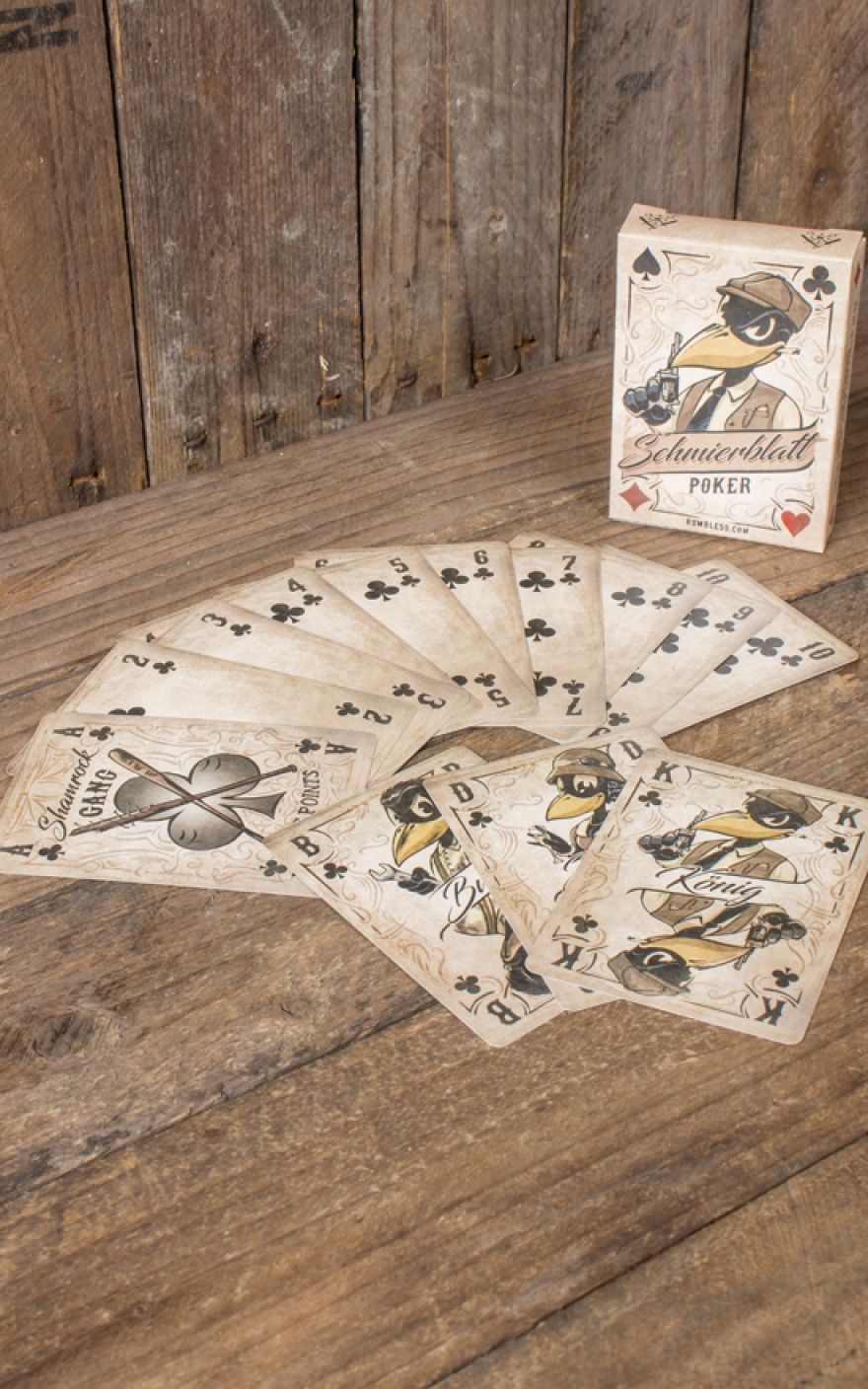 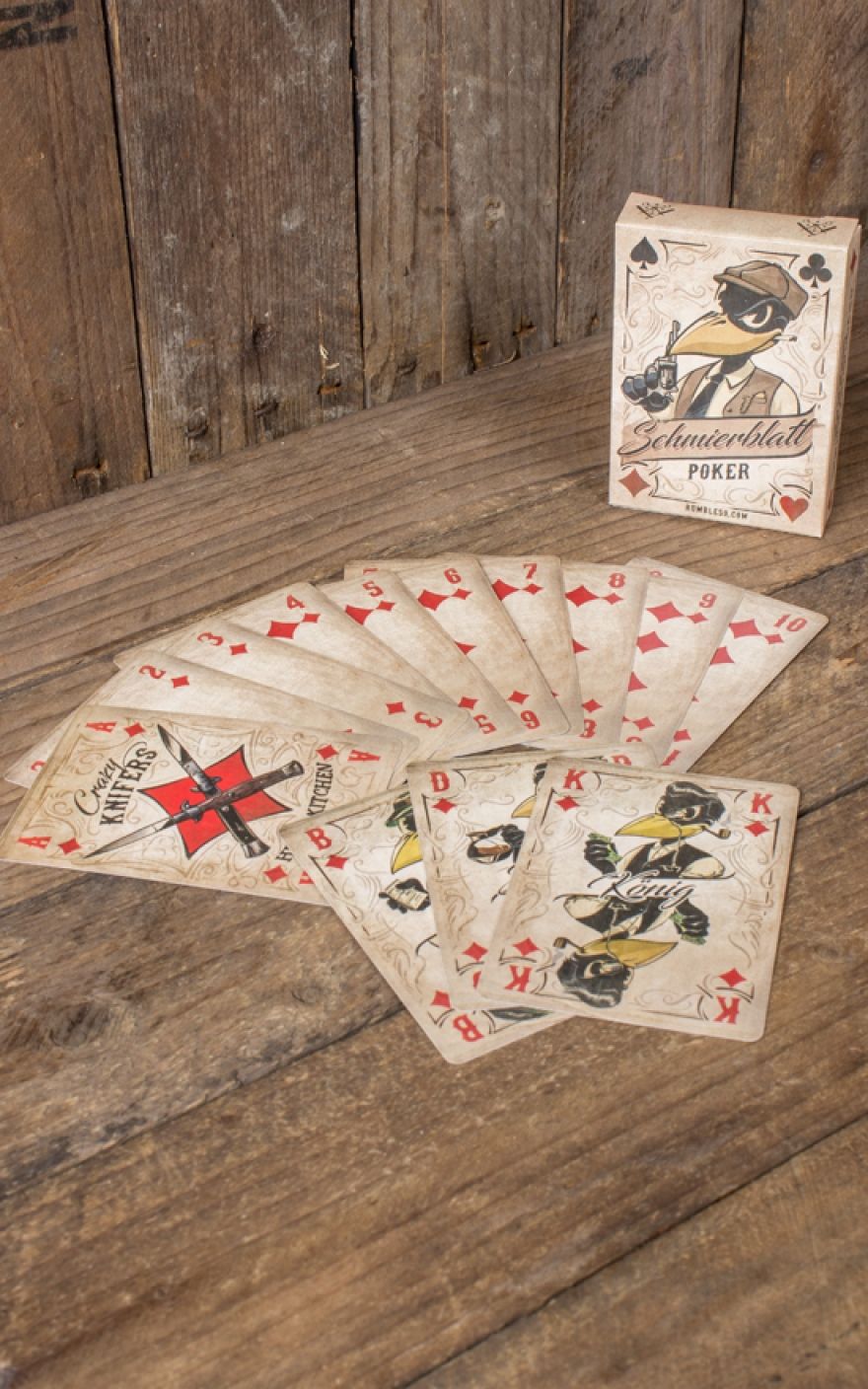 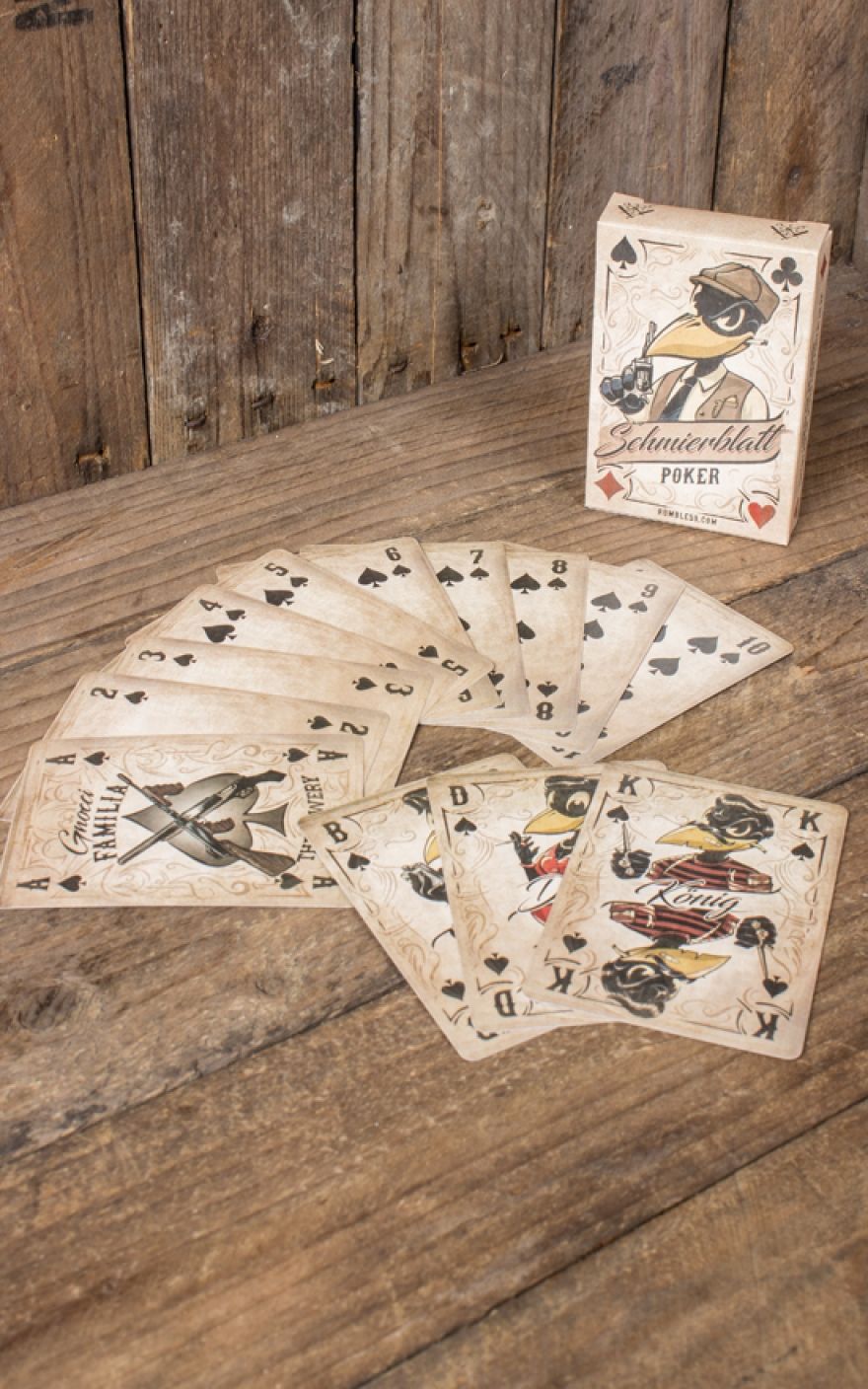 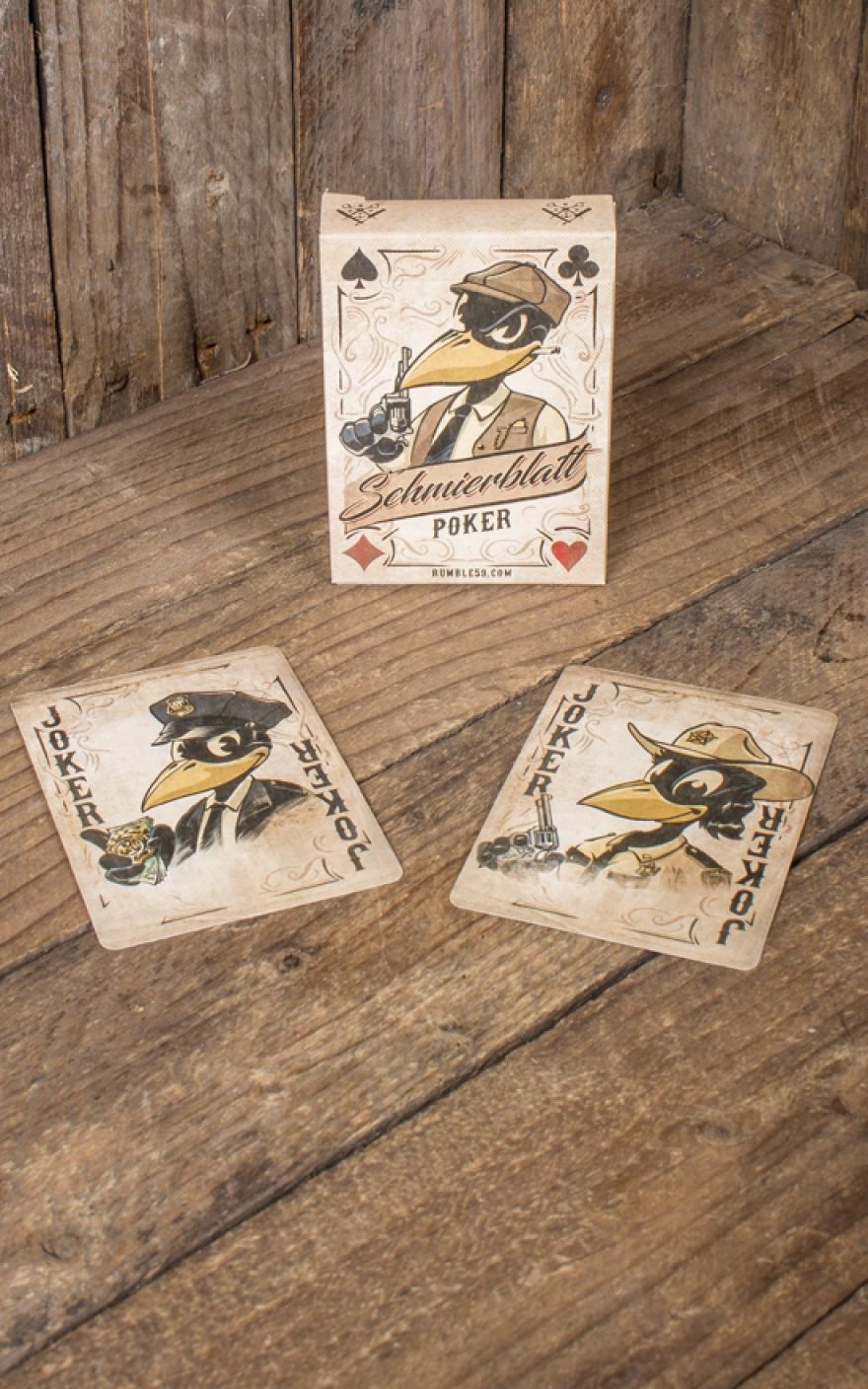 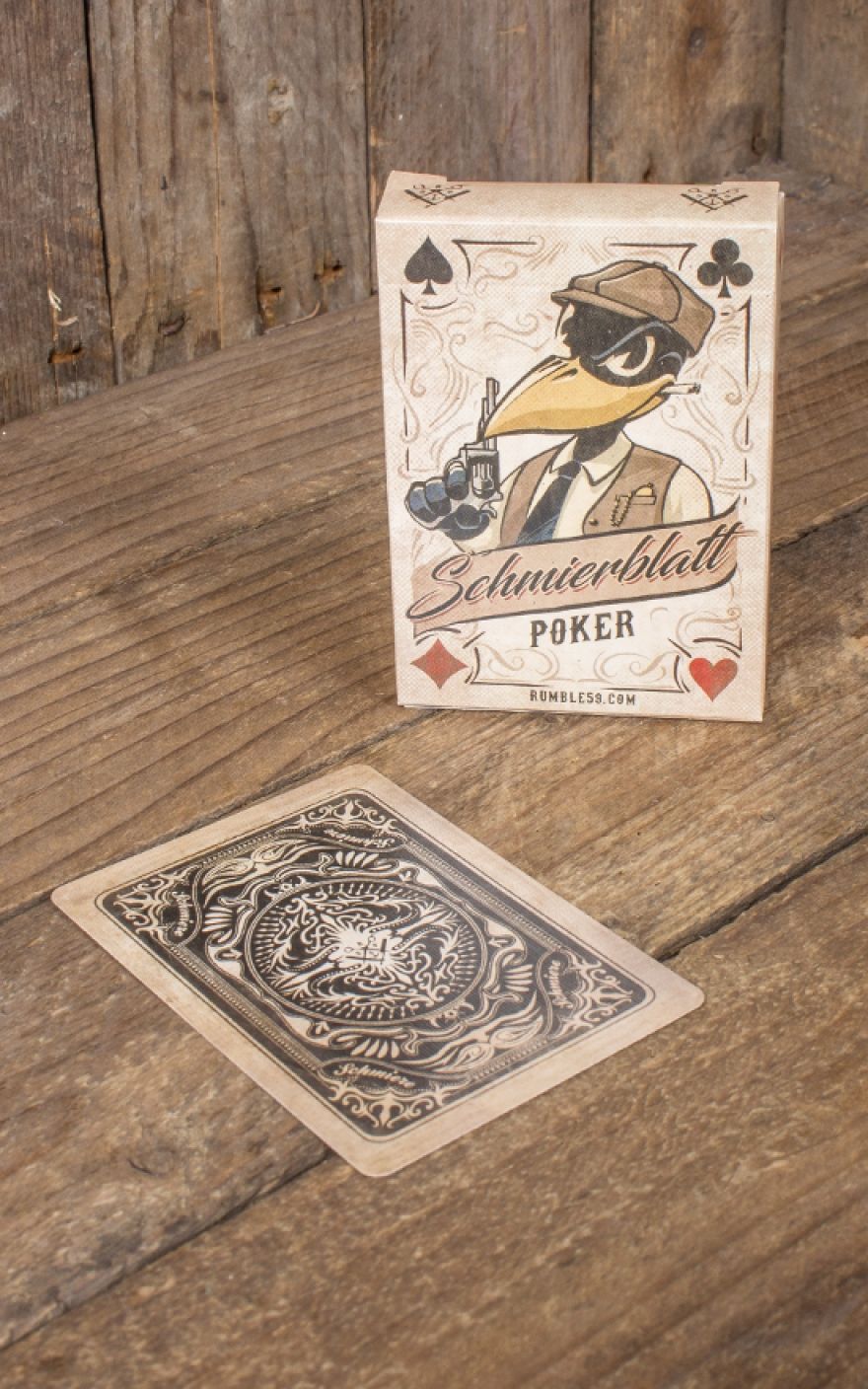 Product no.: RUM616
Get ready, Schmiere fans! A swarm of dangerous figures shaped like a poker hand is coming, now. You can see from 100 feet away that you better don't mess with any of these characters: greasy guys without fear of real fights - with only one goal in mind: power! And be aware of the both sexy and feared molls that are anything but only for decoration. Schmiere ravens to gaze at, to gather, to fear and to play poker with.

Fantastic poker hand with ravens in a 20s gangster style by Schmiere.

The four notorious gangs of NYC were made true legends with marked cards, corrupt cops and dirty deals: The Throat Cutters from New Jersey love the color red - a downfall for every victim that had the favor to meet their razors. The Shamrock gang members from Five-Points don't set their hand tools as they can manage to build a weapon from any material. From Hell's Kitchen: the Crazy Knifers who always bring their Switchblades to every gunfight without ever regretting it. And then there is the Gnocci Familia from Bowery that is taking their family crest very serious: The crossed guns have sparked off the bonfire several times.

The poker deck consists of 52 cards and 2 jokers. An additional ace is included - in case you need the proverbial ace in the hole. And a sweet little gift: a coupon card. The poker cards are printed on high-quality cardboard, have a regular competition size and were manufactured by no other than the popular playing cards company Bicycle Cards from the USA. They are the most widely used played cards in the world and can be found on all poker tables - from most expensive tables in Vegas to the most neglected and shabbiest ones at the nearby backyard.
Poker is one of the best-known card games and is convincing enough because of its competition potential. Anyway, it's easy for newcomers to learn - especially as a parlor game, together with beer and chips. In the USA it nearly became sports just like Bowling. Even if there are many different poker cards, Bicycle decks are one of the most popular ones. Collectors will find what they desire and because of many different designs, there will be something for everyone: golden decorations, precious artworks and very cool printings.
Schmierblatt is convincing because of its detailed design and its lovingly elaborations of all Schmiere ravens characters. Get to know each gang member step by step and journey into the shady world of power, violence and intrigues.

Details about Bicycle Cards:
The United States Playing Card Company creates the worlds best playing cards, for over 125 years. But it had been a long way until the first Bicycle Cards were manufactured: a chinese writer described the princess Tong Cheng playing cards with the family of her husband - which makes the Tang Dynasty the earliest official mention of playing cards in history. 1005 did another chinese author record the rising popularity of playing cards due to the production of sheets of paper instead of the traditional scrolls. Around the 1300s playing cards came to Europe, which we know because in 1367, an official ordinance mentioned them being banned in Bern. Professional cardmakers in Ulm, Nuremberg and Augsburg started using woodcuts to mass-produce decks in 1418. France began producing decks with suits of spades, hearts, diamonds, and clubs in the 1480s. Before the French revolution was the king the highest card in a suit and was replaced as the highest one by the ace. Russell, Morgan Co. was founded in Cincinnati, Ohio as a company that prints theatrical and circus posters, labels and playing cards. In the 1870s did the joker make its first appearance as the third and highest trump (the best bower) in the game of Euchre and not much later in 1885 were the first Bicycle Cards produced by Russell, Morgan Co. Since then, Generals, soldiers, collectors as well as fathers and sons have been playing Bicycle Cards.

Schmiere by Rumble59 offers a big range of pomades and accessories. The poker game Schmierblatt isn't only great for poker friends but even awesome for Schmiere gathers and Rumble59 fans. 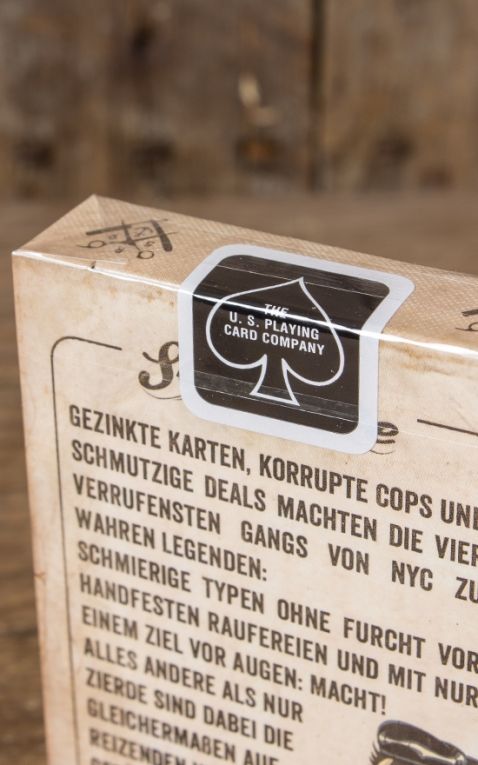